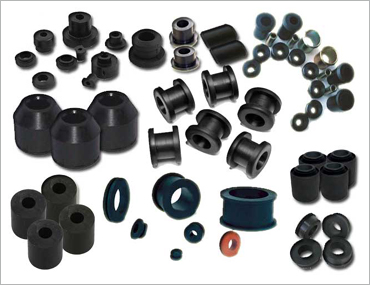 A rubber bushing, sometimes simply called a bushing, is a kind of vibration isolator. Its main purpose is to serve as an interface between two parts, acting as a buffer and absorbing some of the energy produced by the interaction of two parts. It separates two parts while allowing a limited amount of movement, thus minimizing vibration and even noise.

Rubber bushings come in a variety of forms. Typically, they are fashioned into an annular cylinder shape and are encased in metal cases or in outer tubes. In other applications, the bushings have an internal crush tube which protects them from being crushed.

The use of rubber bushings is often preferable to solid connections as noise and vibration are lessened. They can also eliminate the use of lubrication between two parts.

But despite these advantages, rubber bushings do have a few disadvantages that are well worth considering before using them. One of these disadvantages is that they can wear out easily, especially when used in an environment where oils are used. They are also susceptible to extreme temperatures.

Used in the suspension system of vehicles, rubber bushings can adversely affect vehicle performance, especially the handling during cornering and breaking.

Rubber bushings are widely used in the production of vehicles. Typically, they are found in anti-roll bars, shock absorber mountings, double wishbone suspensions, gear sticks and in the internal combustion engines of some cars.The use of rubber bushings in vehicles can be credited to Walter Chrysler, who encouraged the use of rubber vibration isolating mounts, cutting down both vibration and noise especially when the vehicle already has a load. Eventually, rubber bushings were used in parts that generated vibration and noise.

They are also used in skateboards where they aid in the tilting of the trucks and turning the board. Rubber bushings may also be used to help transfer load from one area in a structure to another, thus reducing strain.

These bushings can also be used as shock absorbers, vibration insulators and abrasion resistors. Used with wires, pipes and tubings, rubber bushings can act as seals.

Rubber grommets are similar to bushings and are also used in a variety of functions. One of the most common functions of grommets is to protect eyelets from wear and tear as parts or objects pass through these. They may also be used in wires, rods and pipes that go through firewalls and plates, acting as seals.